Yes, another year has passed and so we enter the 64th year of the Keystone Chapter’s existence. In the same way we look to our storied past for inspiration, we look to the future for opportunity and growth. 2023 will be no different than any other year. It will provide us and our members with many challenges, but with challenges come opportunities. 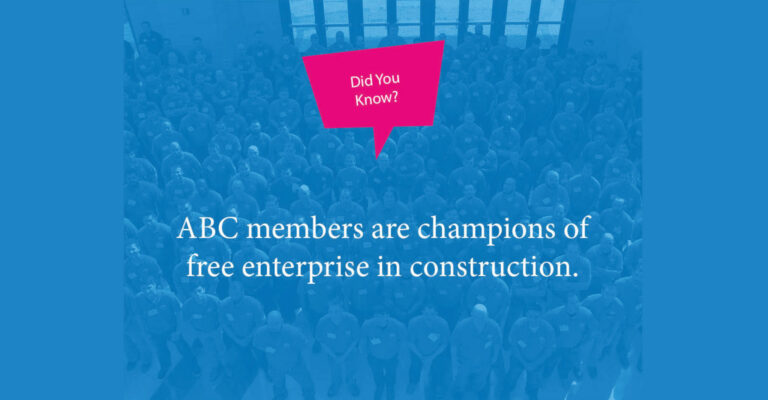 Welcome to our Newest Members and Congratulations to our members celebrating milestone anniversaries!

Message from the Chair:

ABC Keystone Members,
Welcome to a New Year, with new goals and a fresh perspective on the clean slate for 2023. As your Chairman for 2023, I want to take a moment to share some of the exciting initiatives that we as a Chapter will be working on throughout the year.

Construction backlog in November reached its highest level since the second quarter of 2019, as contractors with under $30 million in revenue landed new jobs faster than expected, according to Associated Builders and Contractors.

A Longtime Labor Crunch
The construction industry was already facing a workforce crunch before 2020 due to an aging workforce, more young people being steered toward college and workers who left the industry during the 2008 recession and never returned, says Zachary Fritz, an economist with Associated Builders and Contractors (ABC).

November 13-19, 2022, we celebrated National Apprenticeship Week. During NAW, we celebrate the workers of America — the best in the world — and lift up the importance of apprenticeship programs across America.

Ask an Accountant: Wire Fraud on the Rise

In 2021, the FBI received 19,954 business email compromise (BEC) complaints with adjusted losses of nearly $2.4 billion, up from $1.8 billion in the prior year – a 33% increase!1 Many of these losses result from wire transfer fraud. Fraudsters have become more sophisticated, and their schemes have evolved to stay ahead of the preventative measures that are developed. Cybercriminals don’t discriminate – both small businesses and public companies are targets and victims of these schemes. In many cases, the wired funds are immediately converted to cryptocurrency by the recipient, making recovery virtually impossible.

Message from the Chair: A Year in Review

What a year we have had. Not only did we get back to business as usual, but we set new milestones and welcomed new friends from the northern part of our State. We hit 92% retainage for the second year in a row, and we hit membership growth in July for the first time. One of the exciting parts of the year was the merger of Keystone and Central regions. We now cover 33 counties in PA. We were able to welcome new businesses into the Keystone family and show the benefits of membership. It was exciting to go to the Nittany Valley region and get to know many of the members, meet some great people and get to know their businesses. There are several new business partners for all of us to get to know and work with.

Founder, Josh Hankey, began renovating buildings in the Central Business District of York, PA in 2009 with a mission to revitalize a focused area of the city. After securing and renovating most of the buildings on the square of Princess, Duke, King, and Queen Streets his efforts spread beyond the “Royal Square”.
Projects became larger and more complex requiring a staff experienced in this type of work.

Welcome to our Newest Members and Congratulations to our members celebrating milestone anniversaries!

As I sit to write this article the election results are still not definitively known. What we do know is that PA will have Josh Shapiro as our next Governor. The State Senate will remain Republican. However, there is a good possibility the Statehouse will flip to the Democrats. On the National front, the Democrats will retain the Senate while the house, through leaning Republican, is still undecided.

Many of you heard the news that I departed ABC Pennsylvania in November. The decision was not an easy one. I have a long history with ABC. My career began in Washington, D.C., where I served on legislative staff for the late Congressmen George W. Gekas (R-PA-17) and former Congressman Tim Murphy (R-PA-18). During my time in our nation’s capital, which lasted nearly a decade, I monitored and staffed issues important to ABC. It was there that I learned about the association’s mission and drive for free enterprise. When I moved back to Pennsylvania, I served as advocacy director for a local chamber, where I continued the partnership with ABC – and eventually met and married my wife, Julina (Peterson), who was the Communication Director for ABC Keystone. Julina started her career with ABC as an intern in 2004 and served on the Keystone team until 2017. I have fond memories of attending so many inaugurals with Julina as her date and later as her husband!

Message from the Chair: An Investment in the Construction Industry

Having been a member since 1989, ABC Keystone has time and again demonstrated that our dues are not just an overhead charge, but an investment in the construction industry. Over the years, I have spent hours at ABC Keystone education events, monthly meetings and political events. ABC has always looked to educating its members not only on construction topics, but also other skills such as management and HR training and has kept us abreast of political activities that impact our businesses.

Fall is always a busy time at ABC Keystone with the start of Apprenticeship classes in September, the annual Local Craft Competition, Careers in Construction Month in October and National Apprenticeship Week in November.